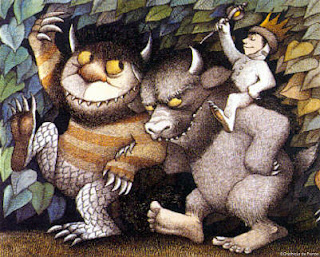 When I was growing up in northern New Jersey, my parents always told me to do just that. Whether hiking, canoeing, or driving down the highway, “keeping your eyes peeled” was a must in the Leonard family, and we were quite good at it. After all, New Jersey – despite its fair share of loading docks, oil refineries, bagel shops, pizza places, turnpikes, and jughandles- is full of wildlife: white-tailed deer, turkeys, black bears, hawks, woodchucks (yes, woodchucks!), raccoons, skunks, opossums, and more. Though I never understood where this expression came from, I did, thanks to years of disciplined training, develop a keen eye for spotting nature’s critters throughout the Garden State’s forests, wetlands, and roadways.

Still, I couldn’t help but feel that the East was missing something, that it was inferior, and paled in comparison to the grand, rugged wilderness of the West. Besides, how many deer and raccoons can you see before you’ve seen them all? Out there, the mountains were taller, the rivers deeper, the trees bigger, and there were canyons and cliffs, peaks and prairies, and deserts and glaciers. Not to mention the animals: elk and antelope, mountain goats and bighorn sheep, grizzly bears and buffalo, and mountain lions and wolves! To a ten-year old from New Jersey, it didn’t seem fair; the West was better! That was where the “wild things” were. But who could blame them: why would any animal vying for a cover photo in National Geographic choose to live out here in the suburbs when it could make its home in the pristine, picturesque wilderness of the American West? It was simple: impressive wildlife demanded impressive wilderness – end of story.

As a ten-year old, however, I had it wrong. Animals don’t simply choose a home, as people might, by sizing up an area’s aesthetic appeal, though, generally speaking it is true that many of the most beautiful places in the world provide superb habitat for a great diversity of wildlife. What matters, especially for raptors, is not the beauty of the place, but rather what’s on the menu – and how much there is to go around. Yet we often fail to recognize this, dismissing the possibility of seeing anything extraordinary in comfortable, predictable suburbia.

I recently was reminded of this as I focused my gaze on a snow-dusted field, momentarily ignoring a hulking Giants Stadium in the distance, and the rumbling trucks bouncing along the New Jersey Turnpike just a stone’s throw away. The Empire State Building, just seven miles to the east, pierced an overcast sky, and the tall reeds which have revegetated the dozens of still visible landfills in the area swayed gracefully in the wind. And there in the field, atop a heap of scrap metal and concrete, was a rare snowy owl. Her mate was just across the road. 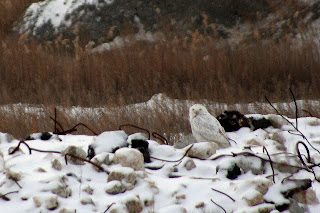 A snowy owl in New Jersey? They don’t belong here, especially not in an old industrial park adjacent to one of the nation’s most despised roadways. Not here in “the armpit of America,” only a few hundred yards from the purported tomb of Teamster boss Jimmy Hoffa. They belong in the Arctic, in the Tundra, beyond the sight or reach of people, in the uncorrupted wilderness, insisted the ten-year old boy in me. Don’t they?

I guess it’s not so simple after all. 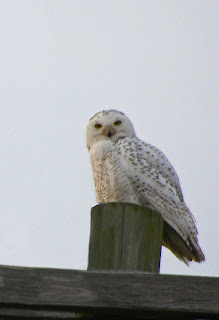 These two owls, along with many more, had left their traditional Arctic hunting grounds due to rising population pressure and competition for food. Somehow they ended up in the urban jungle of New Jersey’s Meadowlands. I never expected to see one in my lifetime, let alone against the backdrop of the New York City skyline and New Jersey traffic. But alas, there she was, and she certainly didn’t come for the scenery. Unsightly as they may be, those revegetated landfills support a healthy population of critters for the owls – not to mention an impressive legion of bald eagles, ospreys, peregrine falcons, and northern harrier hawks – to dine on. Not a bad group. Still, to most people, the Meadowlands is just another exit off the New Jersey Turnpike: nothing to see there!

If only they knew.

And just a few days ago while walking through New York City’s crowded Central Park, a red-tailed hawk narrowly missed having a squirrel for lunch. Here, too, in the most populated city in the country – “the city that never sleeps” – hawks and owls have made their homes, capitalizing on the easy prey that has emerged side-by-side with people. As he perched on a tree, just six feet off the ground and inches from the sidewalk, dozens of people walked by oblivious to his presence, just as dozens of cars had driven past the snowy owls, unaware of this once-in-a-lifetime opportunity to see them in the wild. 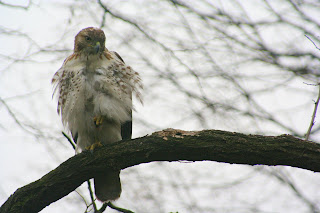 Who knows what other surprises surround us, in places we haven’t looked before? Not only hawks and owls, I think. Rumor has it that mountain lions have been seen in eastern Pennsylvania and northern New Jersey.

I’ll have to keep my eyes peeled.
——————————–
For a neat site about the wildlife in New Jersey’s Meadowlands, including the snowy owls, check out The Meadowlands Blog.

For some surprising pics of Central Park’s other inhabitants, see Urban Hawks.

And for a wildlife drama about them, check out Marie Winn’s Red-Tails in Love.