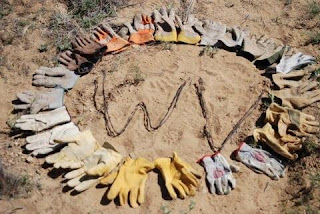 Wednesday was Earth Day. Many people look forward to this global celebration, which began nearly forty years ago on April 22, 1970 – a date which is widely recognized as the beginning of the modern environmental movement. It’s a day when we all can pause and reflect on our role in the world, on our impact on the planet, and on the world we wish to pass on to our children. It’s a day to reform bad habits and embrace new ones – a day to commit to turning off the tap while we brush our teeth, carpooling to work, replacing inefficient windows and light bulbs, switching to reusable grocery bags, recycling, and more. For some it’s a day to celebrate a vision of a healthier planet; for others it’s a day to bemoan the failures of mankind.

Walking through New York City’s Grand Central Terminal this morning, I was reminded of these conflicting perspectives. Hundreds of hustling people – including myself – paused in the Main Concourse to gaze at a projection show displayed on the terminal’s massive pillars as part of the city’s week-long Earth Day NY celebration. Images of snow leopards, glaciers, and rainforests clashed with shots of polluted skies, landfills, and dirty, overfished oceans; smiles turned to sighs and shaken heads; and troubling statistic after troubling statistic played across the wall. Did you know that an area larger than New York City is deforested every day, and that the average American consumes more than 600 lbs. of paper every year? Or that we could reduce our consumption of oil by 100,000 barrels per day if we all took the time to properly inflate the tires on our cars?

Intermingled with these startling and disturbing facts were inspiring, hopeful words from some of the world’s greatest minds, leaders like Dr. King and Mahatma Gandhi. Those of Edmund Burke, an 18th century Irish statesmen and philosopher, particularly struck me:

“Nobody makes a greater mistake than he who does nothing because he could do only a little.”

We all can do our part – however small it may seem – to be better stewards of the planet and our communities. Whether making smarter choices as consumers, practicing Leave No Trace in the outdoors, volunteering for the environment, or starting an eco-friendly business (check out TerraCycle and its exciting successes with “upcycling”), our individual efforts all add up to produce real results.

I think Wilderness Volunteers is living proof of that. Through the collective efforts of our volunteers, WV has contributed since its founding in 1997 more than 180,000 hours of volunteer labor – improving trails, revegetating wilderness, eradicating invasive species, removing fences, and more – in hundreds of wild places in need of our support.

And it all started with a few volunteers and a few trips and a few trails. There’s still far more to be done and no shortage of work in sight, and we look forward to working with you to do our part – on and off the trail.

Thanks to everyone who’s “given something back!”