Up A River in Minnesota… 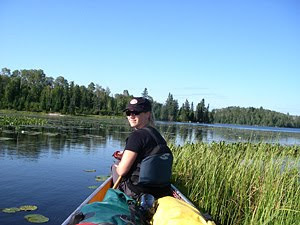 I just returned from the Boundary Waters Canoe Area Wilderness where we worked on portage trails for the week. Sort of like backpacking, only you have to carry the canoe over the portages – as well as your stuff and tools! 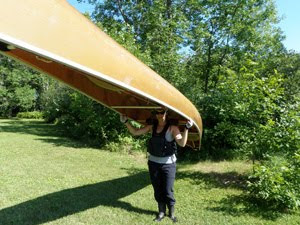 We entered the wilderness at trailhead 14: Little Indian Sioux River and traveled to Shell Lake where we were going to repair the landing on the Shell Lake side of the Upper Pauness/Shell portage. However, it was underwater, so we traveled on to Heritage Lake and set up camp on the northern end of the lake. 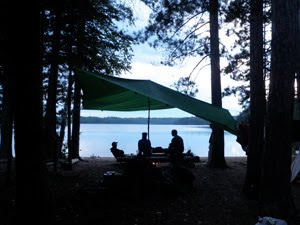 We worked for two days on the Heritage-Loon Lake portage, and then moved to East Loon Lake were we had the best campsite in the BWCAW (IMO) — a sand beach, a world-class view to the north across this large lake, and plenty of room to spread out. Previous tenants had left some impressive “flintsone furniture” in front of the large firepit, and there were lots of trees to hang tarps and drying lines.
On our day off, Wednesday, we invaded Canada by traveling up Loon Lake through the Beatty portage to Lac LaCroix. We had heard there were petroglyphs along a cliff wall. 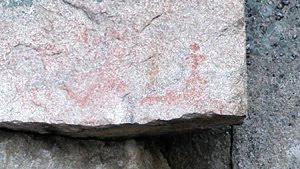 The petroglyphs turned out to be pictographs, faint red images below the high water line. They are thought to be less than 500 years old, and the iron oxide has weathered them to the point of being very hard to see. There is apparently another site on north Lac LaCroix with a Moose pictograph. 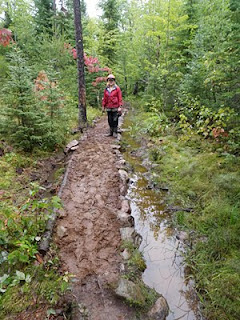 The last two days of the trip, we worked on the East Loon Lake/Slim Lake portage, getting really muddy and moving tons (and tons) of rock. We built a 25-foot causeway on a section of the portage where we sank calf-deep in mud (not fun when you are carrying a canoe!). We raised the trail tread and channelized the water to one side. The peat moss in this area was more than a foot deep. 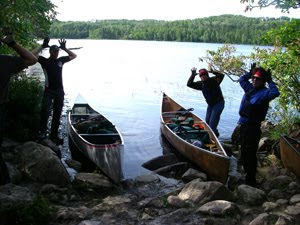 We didn’t get to see any moose, whose numbers in northern Minnesota are apparently on a rapid decline, but we saw loons, crawdads, a salamander, squirrels, crows, eagles and heard distant wolves.

I loved (and miss!) the group of cheerful and enthusiastic people we did the trip with — hard workers everyone. I love going to the Boundary Waters — it’s very different from the mountains and canyons I frequent in the intermountain west. All that water. Loons. Minnesota accents. You betcha!