The Sawtooths: The Lesser Known West Side 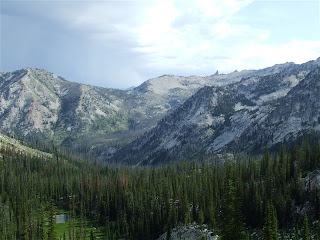 The View from High Pass in the Sawtooth Mountains, ID

Wilderness Volunteers has a long association with the Sawtooth Wilderness in central Idaho, and volunteer leader and board member Gayle Marechal has led a trip there every year since 2003. This August, Gayle – who I might add makes the best blueberry pancakes you will ever eat in the backcountry – and his wife Bunny led a group of volunteers on a service project on the west side of the Sawtooths. As always, the trip was an adventure. Here’s their report:

“The in central spreads out expansively before anyone who crosses over north of the Sun Valley-Ketchum area. Just over the pass, the headwaters of the fabled Salmon River are visible, and thirty miles north is the tiny town of , the hub of activity in the Sawtooths. The easily accessible east side of the Sawtooths is where most visitors experience the area. However, there is another lesser explored but no less beautiful part of the wilderness which can be accessed from the west side of the . That is where we headed. 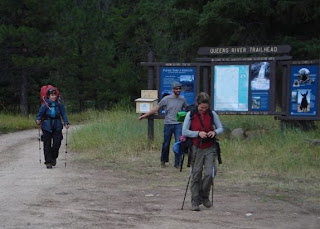 This year’s meeting spot was the Little Queen’s River Trailhead, and just getting there is an adventure. After leaving the pavement north of Idaho City, a forty-mile drive on narrow, bumpy, gravel roads awaits. At the end of those roads is a trailhead usually empty of cars, and this year was no exception. Miles of wilderness solitude awaited us just beyond the edge of the forest. By early evening, all the WV participants and our Forest Service friends – pack animals and all – had arrived, and our trek into the wilderness was set to begin the next morning. 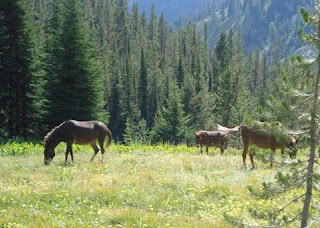 Anyone who has ever been on a trip with pack animals (in this case, mules) knows that “packing” the animals is a slow and meticulous process. After moving all the communal gear and food near to where the stock was tethered so that our two Forest Service leaders, Deb and Kent, could begin packing, we began our eight-mile hike into the Sawtooths. As soon as the sun was up, we knew it was going to be a hot day – and a hot week. The hike to camp required several creek crossings and a gradual ascent of approximately 2,200 feet. We camped in some dense forest by a meadow where the stock could graze and near a creek where we could collect water and refresh ourselves after a hard – and hot – day of work. 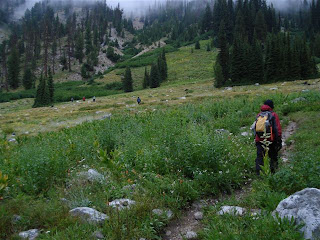 Our work project involved widening and leveling a long stretch of steep switchbacks on both sides of Getting to the worksite required a long, steep climb, but each day the walk was a bit shorter (though hardly any easier) since we completed the work on the farthest reaches first. Progress was slow but steady, and after two days of work we had completed the north side of the pass and a couple of long switchbacks on the south side of the pass. We had earned our day off and intended to enjoy the solitude of the western Sawtooths. Most of the group headed to Brown’s for a day of quiet relaxation, while a few of the more adventuresome folks bushwhacked to in pursuit of excellent fishing opportunities. 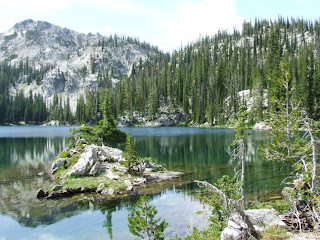 After enjoying our free day, we awoke Thursday with renewed energy and enthusiasm which enabled us to widen and level several long switchbacks, despite all the roots and large rocks that seemed to pop up in all the wrong places! We persevered and, by the end of our third work day, had transformed a potentially unsafe trail into a trail that can be traveled easily by hikers and folks on horseback. Deb mentioned that our work probably would last ten years. 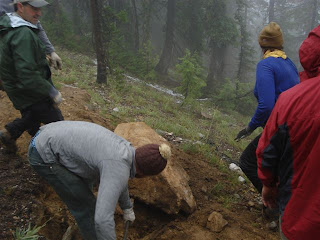 While we worked, the weather changed dramatically. We watched as storm clouds moved rapidly through the mountains, bringing high winds and cooler temperatures. The hot weather was coming to an end. By the time we returned to camp, the temperature had dropped considerably, the rain had begun falling, and we were happy that we had hung a large tarp on the day we first arrived in camp. Everyone put on an extra layer, gathered under the tarp, and watched the storm clouds move across the sky while Gayle and Bunny prepared dinner. The next morning there was snow on the upper ridges, and the clouds hung low over the meadow. We delayed climbing until the weather improved, and eventually it did. We headed to work, finished one last section of the trail, and hiked to the top of the pass where we admired our week’s accomplishments. 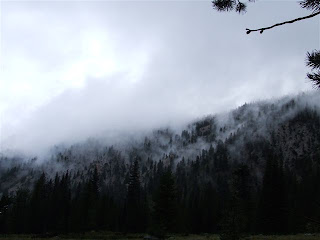 By morning the rain had stopped, but its damage had already been done as everyone hiked out with packs burdened by the load of wet tents. The cloudy, cooler weather made for a pleasant and leisurely hike to the trailhead where we said our goodbyes and went our separate ways. Next year, WV will be back on the more popular east side of the Sawtooths. I’ll miss the solitude of the west side, but I sure won’t miss that bumpy ride on those gravel roads, and none of us will miss that marauding deer who roamed through the camp that night chewing anything that had a bit of salt on it!”