Then and Now…in the Inyo 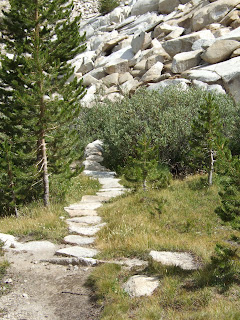 Volunteer leader Kathleen Worley, who in her day job can be found onstage or teaching theatre at Reed College in Portland, OR reports on her latest trip to the Sierra’s Inyo National Forest:

“This summer I had the opportunity to return to an area where I’d previously led a Wilderness Volunteers trip seven years ago: the John Muir Wilderness in the Eastern Sierra’s Inyo National Forest.

Back then, the beginning of the trail to Upper Pine Lake was primarily an old mining road. Now, that road has been transformed into a single track with some pretty impressive steps built by WV and Forest Service crews.

Back then, there were four teenagers on the trip, and Ron Harton, my co-leader, hiked with them to the top of Mt. Julius Caesar. Now, one of those teenagers is part of the trail crew for the Inyo National Forest.

When he found out that a WV crew was working in the national forest , he hiked up to see us on his day off. On our day off, we hiked a loop over Pine Creek Pass, over to the Royce Lakes, and back down past Honeymoon Lake. On our way down, we walked past the trail we first worked on seven years ago. There were the steps we had built, still in good shape. Grasses and tiny plants were growing around the stone path we had laid at the edge of the meadow; a toad hopped by, his meadow habitat now safe from trampling by wandering big-footed hikers whose path was now clearly marked before them. 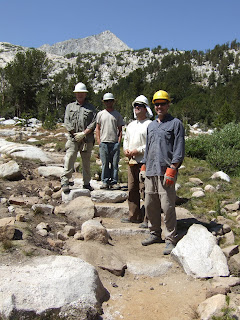 Like our work seven years ago, this year’s work project also was designed to renovate the trail and protect watershed areas by building steps above a stream crossing and near a riparian area next to a crystal clear cascade.

Once again, our group was fabulous, working with great humor, sharing jokes and stories, pitching in with co-leader Misha Kokotovic to build a “scenic” latrine, and celebrating a birthday with matches (in lieu of candles) planted in chocolate Double-Stuff Oreos. Ingenuity at its finest!