The Great Escalante Flood of 2009 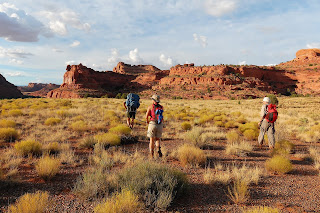 When he’s not teaching Latin American Literature at UC San Diego, Wilderness Volunteer trip leader Misha Kokotovic is busy battling invasive Russian Olive trees – notorious for choking off rivers and streams in the West – along Utah’s Escalante River. His first WV trip led him to the Escalante in 1999, and he’s been going back almost every year since – including this past year, which proved to be his most exciting trip yet.

“Near the end of our second day of work in the Escalante River canyon, we hear someone a few hundred yards downstream from us shouting. It’s someone from our group, so maybe he’s announcing that it’s quitting time. But the tone sounds more urgent than that, and some of us think we might have heard him shout the word “Flood!” That’s not implausible since it’s been cloudy all afternoon, and there were even a few drops of rain. The Escalante River had already risen a couple of inches over the course of the afternoon, which was enough to convince us to have everyone work on the river bank closest to camp so that nobody would get stranded for the night if there were a serious flood. So, yes, maybe he has been shouting “Flood!”

But we’re upstream of the shouting and see no sign of the river above us rising any further than it already has. Then we hear it: a steady roar downstream, which drowns out the shouting. All doubt is erased as the Escalante River reverses course and begins to flow upstream, carrying with it the Russian Olive branches we had cut over the past two days. Yes, there has in fact been a flood, but not the one we expected.

Rather than coming down the main Escalante drainage, the flood has come down the tributary drainage of Choprock Canyon. And our camp, our food, our tents – everything – is on the other side of Choprock, out of reach until the flood waters recede. Despite our precautions, it’s beginning to look like at least some of us may be going to bed hungry and without our camping gear.

We hike towards camp and gather on the river bank directly across from our tents, yet not everyone is accounted for. We can see one lucky group member who somehow ended up on the other side of Choprock and now waves to us from camp. Most of our group waits on the bank while a few of us hike back to the Escalante River to look for the missing, to no avail. We then walk up the Choprock drainage along the canyon rim and spot a group member on the opposite rim. After much gesturing and shouting over the flood waters below, we learn that two group members have been stranded farther up Choprock Canyon. Soon we’re on the rim above them and, after more gesturing and shouting, we’re reassured that they are safe and even enjoying the flood. Finally, the remaining members of the group, including Park Ranger Bill Wolverton, join us on the canyon rim. We’re all relieved that everyone has finally been accounted for, and it’s now time to reconstruct what happened.

Spotting the flood first were three volunteers who had quit work early in order to hike up Choprock Canyon in search of clear water for drinking and cooking (our main water source, the Escalante River, had become very muddy the day before). As they were filling the water jugs, they heard and then saw the flood racing down the canyon. Two were stranded on opposite banks of Choprock, while the third managed to outrun the flood and warn the rest of us – hence, the shouting we heard. Ranger Bill and another volunteer were the first to hear the warning and see the flood spill over into the Escalante River, overpowering the current and reversing the flow for several hundred yards upstream. Caught on the far bank of the Escalante, they hiked upstream to a safer crossing, and joined us on the rim of Choprock Canyon.

With everyone accounted for, but still separated from camp by a rising river, all we could do was ensure that everyone was safe and comfortable while we waited for the flood to subside. Fortunately, the water receded within four hours, and by dark we were all reunited in camp. Dinner was late, but good, and seasoned with stories of “The Great Escalante Flood of 2009” (the tall tales began long before the wash in Choprock was dry). We spent much of the next day – our free day – exploring Choprock Canyon and marveling at the flood’s effects.

Such excitement and adventure is not unusual on WV trips, and this flash flood was not the first I had experienced on an Escalante trip – though it was certainly the biggest and most dramatic. It was the high point of a fun but challenging week spent removing the invasive Russian Olive tree from the Escalante river corridor, an ongoing project to which WV has devoted the better part of the past decade. In that time, we have helped eradicate the Russian Olive from over 36 miles of the Escalante Canyon, preventing it from crowding out the native willows and cottonwoods and, in turn, making the hiking much more pleasant.

I’m always impressed by how much work even a small group of dedicated people can get done when they work together. I’m also heartened to see how people look after each other in the face of potential danger, such as our “Great Flood.” As soon as we realized what was happening, we set out to make sure everyone was accounted for and safe. Some people ran ahead to warn others, some helped locate the missing, and some moved others’ tents and gear to higher ground, and brought clothing and food (which, by the way, had to be lowered down a cliff) to those who were temporarily stranded. What could have been simply a frightening ordeal instead became a thrilling, shared experience.

The flood was the high point of the trip for everyone in the group – including me – but not merely because of the excitement it provided. The group’s response to the flood reminded me of what I like best about WV trips, even more than the good work we do and the adventures we enjoy: our ability to accomplish great things when we work together to fulfill our responsibilities to each other and to the land that sustains us.”

Experience for yourself below:

For more on the project and the progress WV has made, check out Ranger Bill Wolverton’s “War with the Russian Olive.”

And for some great before-and-after shots of the work, click here.