Backpacking in the Siskiyou: Filtered Water and Root Beer Floats 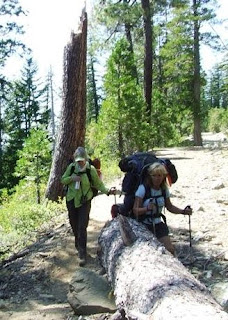 2009 marked the first time since 2001 that Wilderness Volunteers had a project in the Siskiyou Wilderness. The 2009 trip was led by Gayle and Bunny Marechal, and here is their report:

“The Siskiyou Wilderness is located in the Klamath National Forest, just south of the Oregon border in California, making this a convenient trip for the three Californians and the four Portland Oregonians who made up the WV group. From the trailhead, we enjoyed a short four-and-a-half mile hike (mostly downhill) to our campsite, which the Forest Service had already prepared for the group. 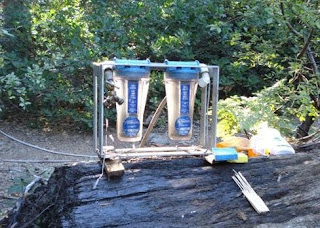 And what a campsite it was! We had filtered water on demand, supplied by hoses running from a creek to a filtering system, a kitchen area with counters, log seats and a freshly dug latrine with a seat! This was luxury backpacking at its finest! (Did I mention that our worksite was only a ten-minute walk from camp?) 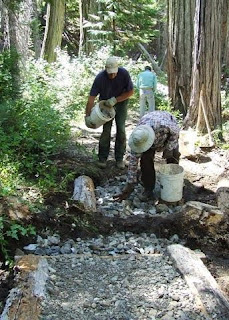 Our primary work project was to build a raised causeway in a muddy area where water seeps across the trail. This project required that the area first be prepared, so some group members began digging out the causeway while others began crushing rocks for the base layer of the causeway and looking for logs to line the sides. The rest of the group went to work on a secondary project brushing the Young’s Valley Trail near our campsite. 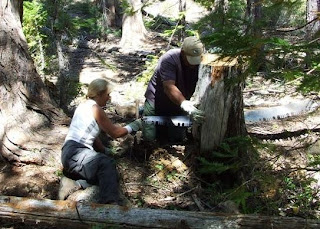 We worked with several Forest Service trail crew members, and they supplied us with expert guidance in using a vintage 1930’s crosscut saw, as well as technical assistance in constructing the causeway. We expected to spend three days building the causeway, leaving us one day to do some brushing and tread work on the trail. But the causeway came together surprisingly quickly, and we finished in only a day-and-a-half, allowing us to do some extra work for the Forest Service. 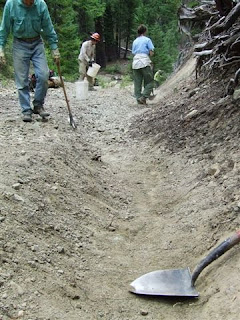 The brushing continued, but others in the group began cleaning out a clogged drainage along a section of the trail, which was causing the trail to erode. We fixed this in no time at all.

That said, the trip wasn’t “all work, no play.” On our day off, we had ample opportunity to explore the wilderness. Some hiked to the top of El Capitan and enjoyed views of the Pacific Ocean. Others hiked directly to Raspberry Lake and enjoyed a swim in its clear, refreshing waters. 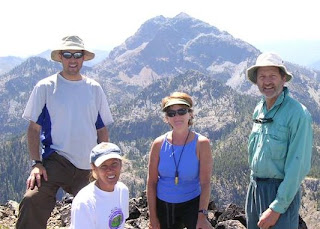 Before we knew it, the week was over and we were packing up for the hike back to civilization. As we waited for the horse packers to arrive, we dismantled the camp, filled in the latrine, disassembled the water-filtering system, and removed any evidence of our presence in the camping area that week. Once the packers arrived, we all got on the trail for the short hike back to our cars, where we were treated to Root Beer floats courtesy of the Forest Service. Now that’s the way to end a trip!” 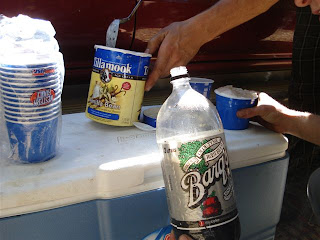