From the Peninsula Clarion

From the Peninsula Clarion 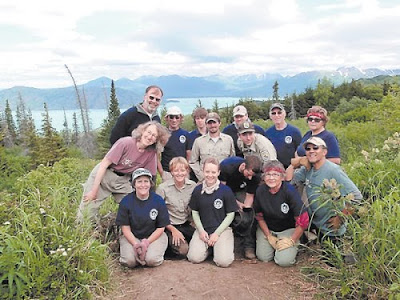 The 2010 Wilderness Volunteers trail crew and staff from the Kenai National Wildlife Refuge. The volunteers came from around the U.S. and worked on the Cottonwood Creek Trail above Skilak Lake.
The author, Ciara Johnson, is kneeling in the front row, second from the left.

Let me introduce you to the Wilderness Volunteers. Their mission is “Stewardship of America’s wild lands through organizing and promoting volunteer service in cooperation with public land agencies.” Earlier this year leaders from this organization contacted the Refuge and began a conversation that is still alive and well today. They offered to send a group of volunteers from all over the United States to do a one-week service project in one of the wilderness areas of the Refuge.

We jumped at the opportunity and began a partnership with the Wilderness Volunteers leadership. Before we knew it, June was here and with it came two Wilderness Volunteers trip leaders. They walked into our Headquarters in Soldotna and within ten minutes were making preparations for the week-long trip into the backcountry.

It was time for take off. Into the trucks piled volunteers ranging from grandparents to grandson, financial planner to opera singer, first-time wilderness volunteer to a 16-trip veteran.

This group wanted the full wilderness experience: no permanent shelters at camp and no machines to do the work project, only human power and creativity. So we went by boat across Skilak Lake to camp at the mouth of Cottonwood Creek. Upon landing, every pair of hands was immediately busy pitching tents, raising tarps, and digging a latrine.

Everyone emerged from their tents the next morning with a bald eagle soaring above camp, the lake glistening, and coffee brewing. The day had been scheduled for recreation, a chance for the volunteers to get situated and enjoy the area. Not a soul was willing to relax around camp, however, and by 9am every person was on the trail, ready to accompany Ryan and me on a hike to the top in preparation for a trail maintenance project.

That evening over dinner, excitement was growing for the project we had scouted — a reroute around a steep, eroded mud slick. There must have been something good in the corn chowder — the group was setting goals high, eager for hard work and a chance to make a lasting contribution to the refuge.

As the size and scale of the project plans grew, the volunteers decided to invite the Refuge trail crew to join the effort. With a wave of the logistical wand five new pairs of experienced hands arrived 36 hours later.

No one skipped a beat — volunteers and crew members who call anywhere from Boston to Tucson home quickly and seamlessly began working side by side, teaching, digging, and sawing — all the while getting to know each other for the first time. In the course of two days, the new trail corridor had been cleared. The volunteers transformed their enthusiasm and vision into hard skills – swinging Pulaskis and pulling crosscuts. Thick alders, stubborn roots, and buckets upon buckets of debris disappeared in a blur of yellow gloves and blue hardhats. By the third day dead trees had been felled, de-barked, sawed into three-foot sections, notched, and assembled into steps that will prevent the trail from eroding over time.

On Thursday afternoon the work had been completed. Fourteen volunteers, five refuge trail workers, and two refuge rangers had joined together for one week and built a section of trail that will last for decades to come. We picked up our tools and began the 1,700-foot descent from our main worksite.

During the 2 1/2-mile walk to base camp we looked at all the group had accomplished in just four days of work. In addition to the major re-route, volunteers had trimmed back branches, sawed through fallen trees to remove them from the trail, and built a solid stone staircase up a steep incline.

The last day we celebrated with one final excursion into the tundra and up talus peaks. On the way home, we bounced down the mossy hillside, clouds began to dissipate and we caught a glimpse of Skilak Lake 2,500 feet below. Everyone fell asleep for the last time on the beautiful beach that had been their home for the week, closing their eyes against the bright Alaskan night. Although it was only a week together, the experience of working so hard and living together in such a remote place built friendships and memories of Kenai National Wildlife Refuge that each volunteer will have with them for years to come.

Each year more and more volunteers have been able to get involved at the Refuge and much of what we accomplish relies on their work. Whether it is a week-long service project on our trails or a summer-long commitment as a campground host or visitor services intern, volunteers continuously make lasting contributions to the Refuge, and they take with them a meaningful experience to share with their friends and family when they leave.

More information about the Wilderness Volunteers program can be found at http://www.wildernessvolunteers.org.