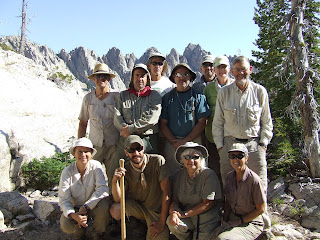 One of the numerous rewards of having been a Wilderness Volunteers leader for many years is working with the same people – both trip participants and agency personnel. Often on my trips, I will already know close to half the participants from having worked with them previously. I have also enjoyed the working relationships I have established with certain agency personnel in areas to which I have returned over the years as a trip leader, and in no place is this more so than in the Sawtooth National Recreation Area in central Idaho. 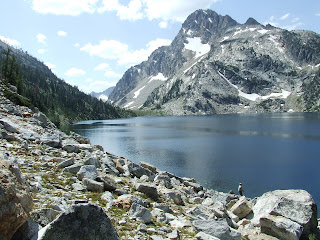 I have been going to the Sawtooths since 1992, and I have been leading WV trips there since 2003. Since I began leading trips to the Sawtooths, I have come to know Liese Dean, the Wilderness Program Coordinator, and we have an easy and cordial working relationship. In 2004, I began working in the backcountry with Deb Peters, who not only packs in, with the help of some mules and horses, all the tools, commissary gear, and food but works with and guides the WV groups in various projects. I have felt fortunate in knowing these two individuals who are dedicated to preserving and maintaining the beautiful Sawtooth Wilderness. Their enthusiasm and love of the area is contagious and has been instrumental in my returning year after year to the Sawtooths. 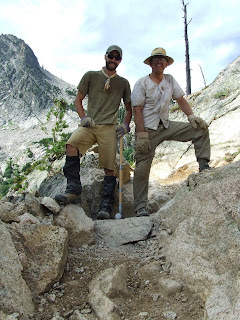 This year’s trip was a special one for me because Liese and Deb honored me and my co-leader and wife, Bunny, with tangible recognition of our contribution in sweat equity to the Sawtooths. I was given a beautiful framed photograph of a lake high in the Sawtooths surrounded by mountains. Bunny received a much more practical but no less thoughtful gift of some Smokey Bear sleep bottoms. She proudly wore them each evening of the Sawtooth trip. My memento now has an honored place on a wall at home. 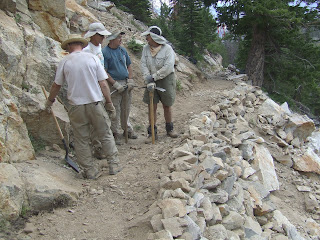 The trip was special for other reasons as well. John Kaye and his son Rob have been participating in the Sawtooth trip since 2004. John has been there every year, and having him along is like having a third unofficial leader. Rob hasn’t been on the trip every year, but when he is, I appreciate his strength, work ethic, and enthusiasm for the task at hand. I was especially happy to have veteran trip participants such as John and Rob on this trip because the work we did was not only technical in nature but difficult and strenuous. Luckily the entire crew was equally enthusiastic and hard working, making the week we spent in the backcountry one of the more pleasant and satisfying in recent memory. 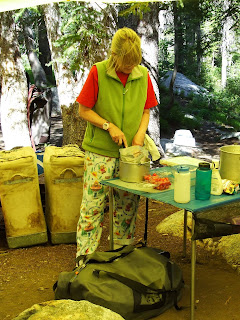 Our work was on the Iron Creek Trail, the trail which leads to Sawtooth Lake, and is probably the most popular trail on the east side of the Sawtooths. The main project was rebuilding a section of shelf trail that was in danger of collapsing. Repairing this section of trail required a method known as cribbing. Cribbing involves placing a sturdy base of rocks below the trail tread by digging into the downhill side of the trail. Rocks are then added to this base until the structure reaches above the existing trail. The tread is then filled in. This method of trail building requires the use of large rocks which are of the appropriate size and shape. Five of us worked on a section of trail which was approximately thirty feet long. The cribbing base was in some parts about ten feet below the tread. The group dismantled and rebuilt the section in two and a half days. Other members of the group completed a smaller section of cribbing, removed rocks from the trail, widened the trail, built stone steps, cleared rubble from the trail, cut back tree branches, and generally improved the trail. Each day dozens of day hikers and a few backpackers came by as we worked; our group and the work we were doing became a showcase for what WV does.

Not only did this group work hard, but its members played hard and were a hardy group. Our campsite was at Alpine Lake, a small lake about a half mile from the main worksite. Each evening we reaped the benefits of lakeside camping by utilizing the lake for leisurely swims, fishing, and contemplative relaxation. One hardy soul took a chilly, early morning swim each day. On the free day, folks went fishing at other lakes, climbed nearby peaks, and hiked. No one stayed in camp. Camp chores got done quickly and often by someone who wasn’t even on duty. I was even brought freshly caught fish on more than one occasion, and I gladly prepared these treats as additional appetizers for the group. Thanks to all who helped make the 2010 Sawtooth trip one of the best ever.

Below is one of the dishes I prepared on this year’s trip.