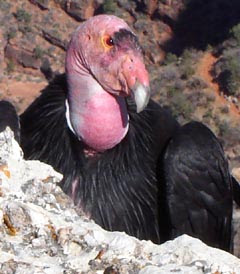 We often see California Condors on the North Kaibab service trips, lazily soaring in thermals or perched on snags in the areas above Kanab Creek. They are huge, very distinctive looking birds with large numbers on their wings (this is a picture of number 33).

I recently learned that the singer Johnny Cash caused a forest fire in 1965 that burned 508 acres including 49 of the 53 condors being raised at a sanctuary in the Los Padres National Forest. Cash, who reportedly said, “I don’t care about your damn yellow buzzards” at the time, was sued by the federal government and settled, bragging for years that he was the only person sued for starting a forest fire.

According to this report, there are currently 369 California condors remaining in the world, and in northern Arizona, several are pulled out of the wild every year to undergo chelation therapy for lead poisoning due to eating lead shot used by hunters. There is a program to give free safe ammunition to hunters and to teach them to clean up the entrails and shot left when they hunt in the North Kaibab, which has been somewhat successful although at least two condors died due to lead poisoning in 2010, and three are unaccounted for.

Spend a week on the North Rim with Wilderness Volunteers for an opportunity to see this rare, magnificent condor and marvel at the 9 – 10-ft wingspan as they take flight.