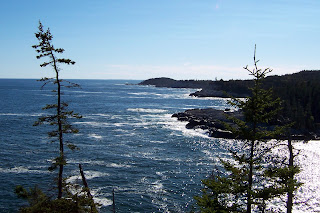 The largest, most familiar part of Maine’s Acadia National Park, the part donated to the nation by George Dorr, John D. Rockefeller Jr., and other wealthy Easterners, is located on Mount Desert Island, just off the coast from the town of Ellsworth. Much less familiar is the part located on Isle au Haut (“eye-la-hoe”), a two-mile wide, six-mile long island located on the outer edge of Penobscot Bay. Although easily visible from the summit of Cadillac Mountain on a clear day, Isle au Haut nevertheless requires a two hour drive from park headquarters followed by a 30-minute ferry ride. Not surprisingly then, whereas the more familiar part of Acadia, for all its beauty and history, doesn’t feel like a wilderness experience, the few square miles of park land on Isle au Haut richly elicit that sense of quietude and timelessness that lovers of wilderness appreciate.

Six years ago in September, my wife Robin and I, along with four friends, launched our sea kayaks into Webb Cove from Deer Island, dodged lobster boat traffic, and island hopped our way through the Stonington archipelago across East Penobscot Bay to Isle au Haut’s Duck Harbor. For three nights, we camped in park service lean-tos and explored, by foot and kayak, the island’s spruce forests, quiet bogs and rocky beaches. We enjoyed views from cliff-side trails down into tiny steep-walled coves where Atlantic surf crashed against the island’s rugged east shore. We paddled, a bit cautiously, among herds of imposing gray seals, sometimes called horsehead seals for reasons that were obvious to us as their faces bobbed up from the waves around us. And we visited the general store in the year-round community (pop. 65) on the northeast corner of the island, closest to the mainland, a community portrayed beautifully in Linda Greenlaw’s book The Lobster Chronicles.

The WV crew that will spend a week on Isle au Haut in September are in for a rare and wonderful experience. There are just a handful of lean-tos on the island and, for most of the summer season, visitors are limited to a three-night stay. The solitude and natural drama of this small island off the Maine coast are very special, even considered among the many special places that WV’ers get to visit.