In September 1996, President Bill Clinton established the Grand Staircase-Escalante National Monument by reading a Presidential Proclamation at the rim of the Grand Canyon. I was there, standing 20 feet in front of the President, hyperventilating with excitement. In my 20 years as an activist in the environmental community, being at that event was one of the highlights of my career.

This year, Wilderness Volunteers’ annual service project, an ongoing cooperative effort to remove invasive Russian olive trees from the Escalante River corridor, will be in the field just a few days after the 16th anniversary of the National Monument’s establishment.

Because of my affinity for the area, and in the national interest of these magnificent public lands, I’ve co-led several service projects in this area…and it keeps calling me back year after year! With it’s deep redrock canyons, ribbons of precious riparian waterways, and vastness beyond the visible, one could explore (and many do) this area in a lifetime and still be enchanted by both new nooks and crevices and old familiar haunts. 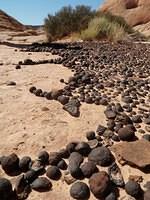 If you’ve got some free time this early Fall, September 23-29, there is still space remaining to join our group on a backpacking adventure you’ll never forget. See Grand Staircase-Escalante National Monument on the Wilderness Volunteers site to sign up. It may be one of the better decisions you’ll ever make!