Below is the first installment of what we expect will be a regular weekly feature of the WV blog – a spotlight on one of the many amazing wilderness areas where Wilderness Volunters will host a project in the next year. We plan to add a bit of insight into the unique features of the land where our projects occur and why we should all treasure what our wilderness areas provide.
~~~

WV has many new service projects in 2013 and one we’re really thrilled about is in the Alta Toquima Wilderness in Central Nevada. The 35,860 acres of the Alta Toquima Wilderness officially became part of the now over 109 million acre National Wilderness Preservation System in 1989 and is managed by the National Forest Service as part of the Humboldt-Toyiabe National Forest’s 6.3 million acres, the largest national forest in the lower 48 states.

Even amongst the grandeur and beauty of the rest of the Humboldt-Toyiabe National Forest, the Alta-Toquima Wilderness stands out as a unique and significant area for our attention. The Toquima Mountain Range includes the massive and intriguing Mount Jefferson reaching just shy of 12,000 feet. The mountain offers terrific recreation opportunities with three summits, all connected over eight miles, with overwhelming biodiversity and plentiful fresh streams that support an incredible array of wildlife, including the nearly endangered sage grouse, native trout, bighorn sheep and many more.
The mountain offers more than hiking and has piqued scientific and human interest for a long, long time. The Wilderness area takes its name of Alta Toquima from the currently highest known native village in North America. In 1978, Dr. David Thomas of the American Museum of Natural History in New York surveyed the long abandoned site, ultimately disproving many archaeologists who believed that early American hunters avoided high altitude environments as too harsh and barren to sustain life. The survey and excavations at Alta Toquima proved that from 2500 BC to 0 AD, the mountains were used intermittently by small groups of hunters who seasonally exploited mountain sheep and permanent villages were constructed after that, around 1 AD. These new large, long-term settlements at Alta Toquima represented a major shift in how ancient Americans used mountain resources, and illustrate how archaeological research continues to teach us about the past.
A century prior to that discovery, this mountain range was the catalyst for a different scientific revelation.  John Muir summited Mt. Jefferson on August 17th, 1877, noting its striking qualities and confirming the theory that the Great Basin was indeed carved of glaciers:
“…while making the ascent of Mount Jefferson, the dominating mountain of the Toquima Range,  I discovered an exceedingly interesting group of moraines, cañons with V-shaped cross sections, wide névé amphitheatres, moutonnéed rocks, glacier meadows, and one glacial lake, all as fresh and telling as if the glaciers to which they belonged had scarcely vanished.
….This is a very marked and imposing mountain, attracting the eye from a great distance. It presents a smooth and gently curved outline against the sky, as viewed from the plains, and is whitened by patches of enduring snow.”
-John Muir, Eureka, NV, 1878, The Writings of John Muir, vol. 8 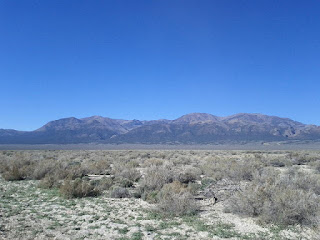 The mountain still maintains significant scientific interest today, recently becoming designated as a Research Natural Area by the forest service given its extreme conditions and opportunity for the study of alpine plants and wildlife.
Indeed, the Alta Toquima Wilderness offers a great deal of exciting history, knowledge and beauty.  The Wilderness Volunteers service project there will allow you to visit, experience and enjoy this amazing land while giving something back.  We’ll camp at the lovely Pine Creek campground and work on the trails to provide access to the higher elevations, plus we’ll have an opportunity to explore and play in our free time.  Learn more and sign up for the WV service project in the Alta Toquima Wilderness.
If you’ve got a favorite wilderness volunteers project you’re partial to and have info or photos to share with us, please don’t hesitate to email info@wildernessvolunteers.org.