By Chris Stockdale
For the three first-time volunteers with WV, the service week at Natural Bridges National Monument in Southeastern Utah was an inspiring introduction to the organization and the contributions it makes to maintain our wilderness areas, national monuments, and parks. In addition to our capable and friendly leaders, the ‘newbies’ could pick the brains of the other volunteers, all of whom had participated in numerous other service trips. The enthusiasm of the eleven participants, ranging in age from the 20’s to 60’s, was amazing. They came from all around the country, and some were experiencing Utah’s stunning canyon country for the first time. 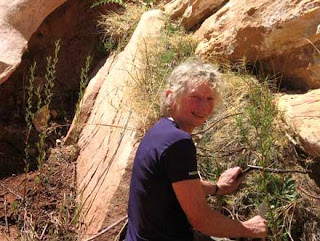 Our project was to eradicate the invasive tamarisk growing along the creeks running through the spectacular canyons of the area. To our surprise, there weren’t as many plants to cut down and treat with herbicide as we anticipated. Because we were searching for tamarisk we spent more time hiking the canyons of what is the smallest National Monument in the United States, and we had the chance to see all the natural bridges up close. We worked alongside two park rangers, and on our last day of work, ranger Jim took us on a hike up a less visited, though equally beautiful, canyon.

For the most part the weather was beautiful. We did endure one rain storm, but as is common in the desert, it was short-lived, and we were still able to get some more hiking under our belts. We agreed that it had been an enjoyable week and all the first-timers stated they would be signing up for more trips. The standouts for veteran volunteer Selma Kristel were the secluded camping area, lively talks about our trips to exotic places and the chance to explore remote parts of Natural Bridges. On our last night in camp, Jim came by to thank us profusely for all the help the volunteers had given him and his staff. We all left on Saturday knowing that we had in a small way helped to rid this magnificent monument of an invasive plant.