While I’ve come to get the know Wilderness Volunteers very well over the last half year as the organization’s first Development Coordinator, it wasn’t until the recent service project in America’s newest national park, Pinnacles, that I got to experience WV in the field. It was a truly wonderful experience getting out into the wild to give something back as well as meeting a terrific group of dedicated volunteers and park personnel.

We arrived to the Pinnacles campground on the east side of Pinnacles on a warm Sunday afternoon after a lovely drive down highway 25, known as Airline Highway supposedly because pilots used the highway as a marker on the route from LA to San Francisco. The highway has beautiful rolling hills as it parallels the San Andreas Fault, which figures into how Pinnacles came to be. The exposed rocks of Pinnacles’ peaks differ from these surrounding foothills, as it is part of the remains of a massive ancient volcano that was active 23 million years ago. As part of the Pacific Ring of Fire, the volcano was 15 miles long and nearly 8,000 feet high.  Surprisingly, the volcano was located nearly 200 miles to the southeast, just north of where LA is today. Due to the earth’s tectonic plates colliding and shifting, the volcano was split and two-thirds of the remains have been pushed north to where it lies now.  As the plates moved, the mass sank and erosion has carved the impressive spires that are the Park’s most recognizable feature. Surprisingly, the rocks continue to move towards San Francisco at the rate of a quarter of an inch per year.

After we all arrived and set up camp, the group began to get to know each other over our first fabulous meal prepared by Carleton Sheppard. Wonderful meals would become a regular occurrence during our week at Pinnacles thanks to Carleton.  The other half of our leader team, Bill Sheppard, then gave us a brief intro on what to expect for our first workday the following morning, when we would meet with the NPS staff.
After a hearty breakfast, we were introduced to the park by NPS staff Brent, Lucy and Esperanza, who gave a great overview of the Park’s features, history, conservation management goals and potential hazards to be aware of during our time in the backcountry. We were then given leather work gloves, counters, hiking poles and snake chaps as we set out to begin our week hunting for invasive plants throughout the park. Lucy and Esperanza would be our guides for the week and we began by searching from the Bear Gulch area back to campground for invasive Italian Thistle.  We scoured hillsides and walked along a wide seasonal creek bed filled with native poppies. After lunch we spread out to scour through a section of forest until one of our volunteers, John, found the mother load of thistle. We all joined together in an approx. 40′ x 40′ area to pull thousands of this invasive weed that has been choking out native species.
Tuesday was our free day, since there was a meeting that required attention from NPS staff and we split into groups to climb into the heart of the park via the High Peaks Trail, sadly leaving behind one of our compatriots at camp who was feeling under the weather. Despite leaving at different times and taking slightly different routes, our group met up at the Scouts Peak lookout that offered views to the west of the Salinas Valley and the Santa Lucia Mountains that lie run along the coast. We then climbed the steep and narrow section of the trail, which was exhilarating!  Yet another fabulous lunch was followed by nice views of the Balconies section of the park and then venturing down Condor Gulch trail, which gave terrific views of the rocky crags and spires. Tuesday also was the first time for confirmed sightings of one of the park’s other claims to fame – home to the endangered California Condor. 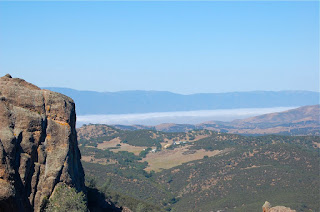 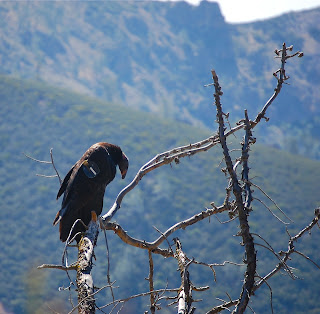 Wednesday morning was the coldest of the week, reaching just above freezing.  While the cool nights

generally offered a nice respite to the hot and dry 90 degree days, this was a very chilly morning. We warmed ourselves by a nice morning fire before taking off on one of the longer hikes of our time in the park. Departing from the Old Pinnacles trailhead, we walked north of the high peaks we had climbed the day before, along the relatively level Chalone Creek – named after the indigenous people who lived in the area. All week long we saw many beautiful birds and butterflies, and this day was no exception. After reaching the entrance for the West side of the park, we went off-trail to attack the other invasive plant we would hunt during our time at Pinnacles – invasive mustard.  We found many mustard plants, some right as they were flowering, preventing the plants from reaching the bolting stage. All the while, we had terrific views of Machete Ridge. After successfully removing several thousand mustard plants, we trekked back to the eastside of the park, passing through Balconies Cave. The caves in Pinnacles are another fun feature of the Park.  They are above-ground Talus caves, formed by falling boulders and rocks trapped in steep canyons.  The caves are partially closed to protect the bat populations that make their home there and are fully closed to the public during breeding season.

Thursday was a fascinating day as we were introduced to Alacia Welch, one of the Park’s Condor Biologists. Alacia led us to areas of the Park normally closed to the public.  We ventured up a steep road to a ridge where we would continue our hunt for invasive plants. Working along steep terrain, we were treated to views that few visitors to Pinnacles see.  We also watched a young condor perch in a tree nearby the NPS facility and then watched as it took flight over our heads. Their wingspan is seriously impressive. We asked Alacia every question we could think of, and weren’t able to stump her. We toured the condor facility and saw how they trap and release birds, and monitor the birds through one-way mirrors. 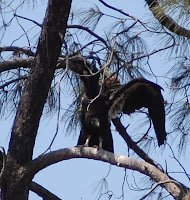 The California Condor was very nearly extinct due to poaching, lead poisoning and habitat destruction – with only a population of 22 in the wild in the 80s. A controversial captive breeding program began in 1987 by the government and continues to this day. Pinnacles is an important site for monitoring the health of the population, with other important sites in Southern California, Baja and Arizona.  Those original 22 birds were given numbers #1-22 and tagged with monitors. The population has now reached more than 400, with more than 200 living in the wild.

We also assisted Alacia by moving brush to cover exposed water lines that had recently been installed by the facility. We then continued to hunt for invasive plants and took an adventurous off-trail route down the mountain and back to the campsite.
Friday was our last work day, but it proved to have some of the most impressive scenery of our time at Pinnacles.  We began by traveling through the Bear Gulch caves and reaching the bear Gulch Reservoir – a man-made reservoir to be used in case of fire protection. We then ventured off-trail into backcountry canyons, searching for more invasive plants, finding both thistle and mustard, as well as hundreds of butterflies, birds and a snake or two.

My first WV service project was an absolute blast. By my estimates we pulled more than 10,000 invasive plants, covered over 30 miles of hiking and saw a terrific array of flora and fauna. My biggest takeaway, however, was how wonderful all the participants were! Our leaders, Bill and Carleton, were fantastic and kept us safe and well fed. All the volunteers were lovely folks, had a wonderful attitude and really embodied the spirit of giving something back.  I can’t wait for my next WV trip!
See more photos from the WV service project in Pinnacles NP