Reflections on the Retirement of a Favorite National Forest Partner

Below Wilderness Volunteers leader Kathleen Worley reflects on the retirement of Keith Waterfall, a long serving agency contact in the Inyo National Forest.  While Keith may have moved on, Kathleen is leading another great project in the Inyo NF in 2016, this time at Lake Ediza in the Ansel Adams Wilderness.

Keith Waterfall was the ranger in charge of the first Wilderness Volunteers trip I ever led, along with Bill Olmsted, to the Hilton Lakes in the Eastern Sierra.  He partnered with WV to set up projects in the Little Lakes Valley, at Lamark Lakes, Upper Pine Lake and Honeymoon Lake, Gem Lakes, various places above Lake Sabrina, and up Big Pine Creek in the Seven Lakes Basin below the Palisades Glacier. On that first trip he drove up from his office in Bishop to meet us at the trailhead and hike in with us to show us the project.  He arranged for packers to take in our supplies, with all our food sealed in big bear barrels that looked like oil drums (not the sleek sliver bear boxes we use now).

Our task was to build a long causeway through a meadow being trampled by packhorses on their way to Davis Lake.  A great two-man trail crew, John and Eric, supervised our work.  We hauled logs to mark the sides of the causeway, stripped off the bark, gathered rocks, laid them inside the log rails and crushed them with rock hammers, large and small.  We had a great crew. Carol got up early and made coffee every morning.  Joel had every gadget known to mankind, so we connected via radio during the free day, one group atop a mountain and the other at the edge of a waterfall.  Amy swam out to the island on Davis Lake at lunch while the rest of us watched the week-long progress of a fire high up in a granite bowl above us.  John came to my rescue when bears returned to camp in the middle of the night after breaking into one of the food barrels earlier in the day.  They’d eaten or carried off most of that night’s dinner, but we managed to improvise something; for the rest of the week people returned from trips into the woods carrying tooth-dented cans of tuna.

Not all trips Keith set up were quite as memorable, but there was always something strange and wonderful.  He chose campsites with amazing views and a good spot for a kitchen.  He found us places to camp the night before each trip and chose great packers to take us in and back out again.

Some projects were more fun than others but all felt worth doing.  We had a great time destroying all trace of the former trail over Bishop Pass.  Though a new trail had been constructed, people coming down the pass could see the old one and were tempted to take it, since it looked shorter and less steep, but it passed under an active glacial moraine that could at any moment roll giant rocks onto unsuspecting hikers.  We got to roll many a rock ourselves, obliterating all evidence of the former pathway.  We also attempted to obliterate all non-natural traces of a former private lodge in the Seven Lakes Basin.  We filled and carried bags of cement from the foundation down the trail to a point above one of the lakes where we could dump the cement into the water. At one point, a woman in a pink inflatable boat rowed across the lake to find out what was happening, threatening to report us to the forest service.  She didn’t know what to make of the fact that the people who were doing the dumping were in fact forest service employees.  We cleaned campsites, got rid of fire rings, built a new trail at Gem Lakes, built checks and steps above Sailor Lake on the way to Hungry Packer and Midnight. We got to visit Heidi’s house, the remains of what had been built for the High Sierra filming of Heidi. This past summer, I joined Misha Kokotovic for the leader training trip at Honeymoon Lake and walked on the stone pathway above the lake created by the WV crew Ron Harton and I had led there many years before.

Keith always sent us out with great trail crews, though the crews had fewer members as forest service budgets diminished.  He did his best to find worthwhile projects we could accomplish successfully, knowing that WV crews are capable of more than might be expected of others.  We worked with Student Conservation Association interns, with Friends of the Inyo, with volunteer camp hosts, with back- country rangers, with trail crews and on our own.  Now that Keith has retired, we don’t know what will happen exactly.  The Forest Service has decided that the Inyo National Forest can cutback on trail crews and back-country rangers, so they will need volunteers more than ever, and yet there may be less staff to identify and/or supervise projects. (Editor’s note: The 2016 Inyo project at Lake Ediza is being planned with the Mammoth Lakes office instead of Bishop office). I will miss the yearly conversations I had with Keith about where we might go, what we might do, why some trips filled and others didn’t and what we might do about that.  I will miss meeting him at the office in Bishop where I would transfer all the food from bags and coolers into the sleek silver bear boxes that packers would carry up for us and that no bears ever managed to open. 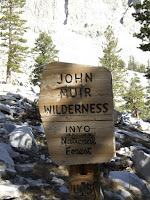 On behalf of WV, I extend many, many thanks to Keith Waterfall for being one of our longest-term partners. His last name seemed so perfect for a man who was so well fitted for his position that we sometimes wondered whether it was a name he had acquired rather than one he was born with. In any case, it suited him as perfectly as he suited his job. May it continue to connect him with wild places during his retirement. Keep in touch, Keith. We’ll miss you.

Kathleen Worley grew up in Reno, Nevada, which perhaps explains her love of the high desert as well as the granite spires and crystal clear lakes of the Eastern Sierra Nevada. She has led more than 30 projects with Wilderness Volunteers in Nevada, Utah, Idaho, Oregon, California, and Hawaii. She recently retired from teaching theatre at Reed College in Portland, OR.