In late April, a Wilderness Volunteers group trekked on an 8 mile backpack to a beachside campsite deep into the rugged Lost Coast of Northern California.  The Lost Coast is the longest stretch of undeveloped coastline in California. 68,000 acres are managed as the King Range Conservation Area by the Bureau of Land Management. The terrain is extremely rugged and the area experiences relatively frequent earthquakes due to the nearby Mendocino Triple Junction – the meeting of three tectonic plates just offshore.  Home to lush forests of Douglas-fir, Coastal Redwoods and Tanoaks, the area supports abundant wildlife including endangered coho and chinook salmon, steelhead trout and spotted owls.

This was WV’s inaugural service project with the King Range National Conservation Area. Participants worked on trail maintenance, including building new sections of trail and water crossings, as well as removing beach debris.

By all accounts the trip was successful! We received these kind words last week from Gary Pritchard-Peterson, the manager at King Range NCA. 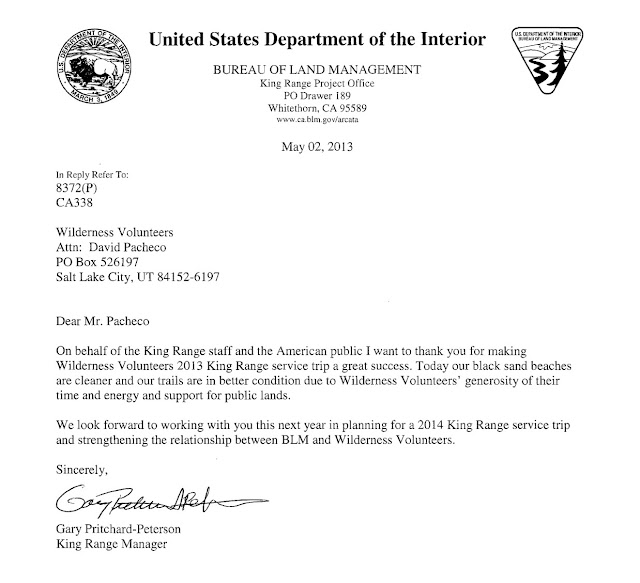 We’re very grateful for all the participants’ hard work and are really looking forward to returning to the area next year!