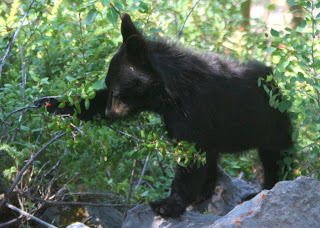 Our inaugural trip last year into West Virginia’s Cranberry Wilderness – 1 of 8 projects in the east in 2011 – led us into the middle of 90,000 acres of beautiful hardwood forest, which up until 2007 was a black bear sanctuary boasting nearly 1 bear per square mile. (By comparison, Shenandoah National Park, home to one of the greatest concentrations of black bears in the country, is estimated to hold upwards of 1.5 bears per square mile). As with any trip in bear country, securing our food from bears – as well as raccoons, chipmunks, and possibly bigfoot – was a top priority.

Heavy duty bear boxes are generally the preferred method of choice, particularly when you have a group of hearty and able mules and horses to carry them and your food into camp. With no trails in the Cranberry graded for pack animals, we turned to the tireless Forest Service and their strong and able backs for assistance.  Short on bear boxes, we improvised.

Enter the PCT method, which requires only 50-60′ of rope, a carabiner, 1-2 stuff sacks, and a sturdy 6″ long stick.  (And a tree of course).  Unlike the usual method of simply throwing a rope over a limb and tying one end to a nearby tree (and hoping that a bear doesn’t pull the taut line – and the food bag – down to the ground), the PCT technique allows the rope to hang freely, tension-free from the limb, eliminating the risk that a critter will wreak havoc in your backcountry kitchen and spoil your next meal.

Here’s a great step-by-step tutorial on how to use the PCT method, which came in quite handy during our stay in the Cranberry.  It will take some practice to get the hang of the clove hitch, but once you do you’ll appreciate the simplicity and utility of this approach.  We certainly did and we’ll be using it again when we head to the Monongahela’s Dolly Sods Wilderness this October.

Have suggestions on how to improve upon the PCT method? Or suggested alternatives? We’re all ears!